Even though I am not a father to any human who has been born yet, I sure am reaping the benefits! Lauren took me out for BBQ last night and prepared a massive Father’s Day brunch this morning. And I received a gift card from my parents. I suppose I have been a good father to our beagle, however.

Twenty years ago this week, O.J. Simpson was racing down the freeway in a Ford Bronco. The baseball season was about to be canceled by a strike. And Dick Glanzer was being heralded in the Huron Daily Plainsman as Father of the Year. 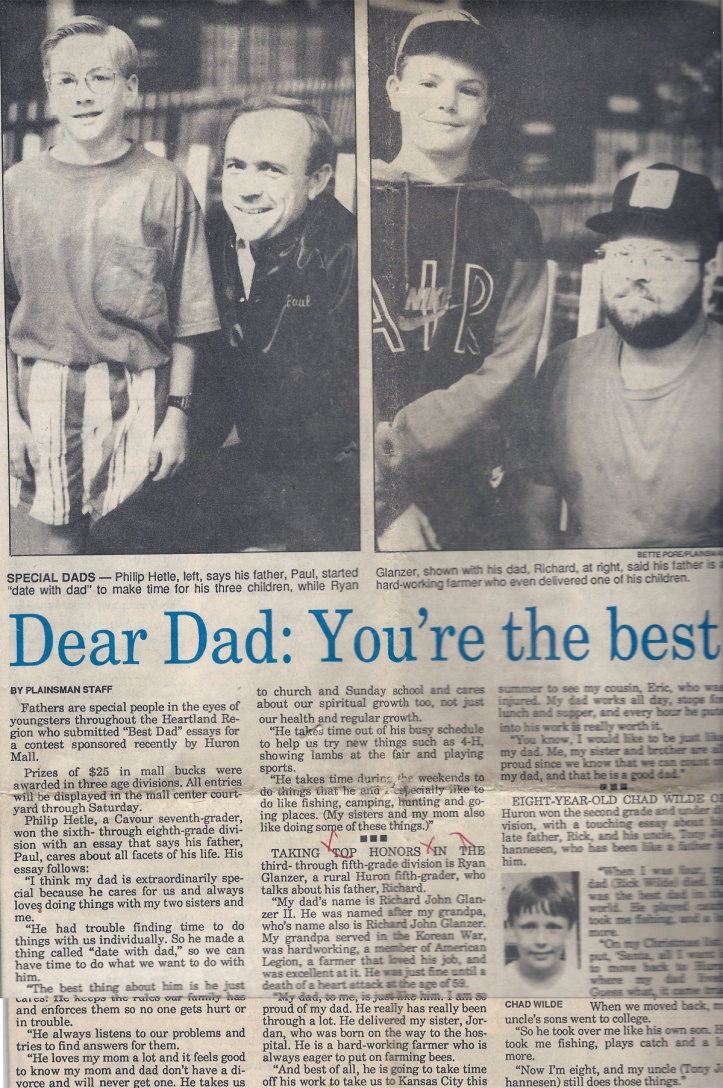 As I mentioned on Facebook, I recall this day very vividly. The family was getting all packed up and ready to head out on our first out-of-state vacation, venturing to Kansas City to visit cousin Eric who was hospitalized in Olathe, Kansas. The skies in Carpenter were overcast, and Dad had already driven to Huron for some reason or another, likely to pick up some auto or tractor parts. We received the phone call that my essay had won the 3rd-5th grade division, and a photo was needed for the newspaper. Mom frantically called around Huron and managed to get a hold of Dad, and off we sped to the Huron Mall to be photographed. I also collected my $25 gift certificate for use in any store in the Mall. I am fairly certain I used the money on the 1993 Micro Topps baseball card complete set, a whole wax box of 1992 Topps Jumbo Packs, and some pink silly string. Not a bad haul!

I dug out this article from my collection of old newspaper clippings and scanned it today. I also managed to track down the other two winners on Facebook and tag them.

If I were at home for Father’s Day, I’d grab a bottle of E&J Brandy and head out to the farm for some day drinking. But as it is, this old trip down memory lane will have to suffice. Happy Father’s Day!