After receiving a Lowe’s gift card for Christmas from the Glanzers, I decided to buy a miter saw and get back to work in the garage building some much-needed stuff around the house. I had lobbied to build a new front yard deck/patio, but Lauren wasn’t so sure. The compromise was to build a front porch swing. This way, we would appear more neighborly and start utilizing that large front yard which normally serves very little purpose.

I found some plans online for a swing and a stand. I followed the plans exactly except I made the swing a little wider. Building the swing required use of the Kreg Jig, a highly valuable tool.

It didn’t take much to put the swing together after all the cuts were made. The only part that was tricky was the instructions said to attach the arms first, and then go back and attach the seat boards. That proved impossible to fit a screwdriver of any sort under the arms to attach the boards, so I had to take the arms off temporarily.

The stand is outrageously heavy, so good luck, thieves! It was fairly easy to assemble each of the posts, but putting the cross beam across the top all alone was tricky. It was also tough to put the support boards into place single-handedly, but I’ll be damned if I didn’t rise to the challenge.

I broke out the trusty power sander and smoothed everything all out. The little curves in the footer of the stand were mostly just sanded down after some pretty jagged cuts with the circular saw.

The stand was complete, and took a second man to help move it out of the driveway and into the grass. Next began the staining process. I screwed up, however, as I purchased transparent waterproofing finish instead of stain. It wasn’t until I was done applying it that I realized my mistake. Now the bench and stand are both kinda orange and don’t really match from one piece of wood to the next. Oh well, I’ll let weather run its course on this beast for a few weeks and then try to apply some actual stain.

I found a chain in Home Depot for about $15 that was intended for porch swings. It was easy to attach with the right tools.

Here’s the finished product, minus the painting/staining/finishing. All that matters, of course, is that the swing can hold human weight. I tested it out with some delicate cargo. 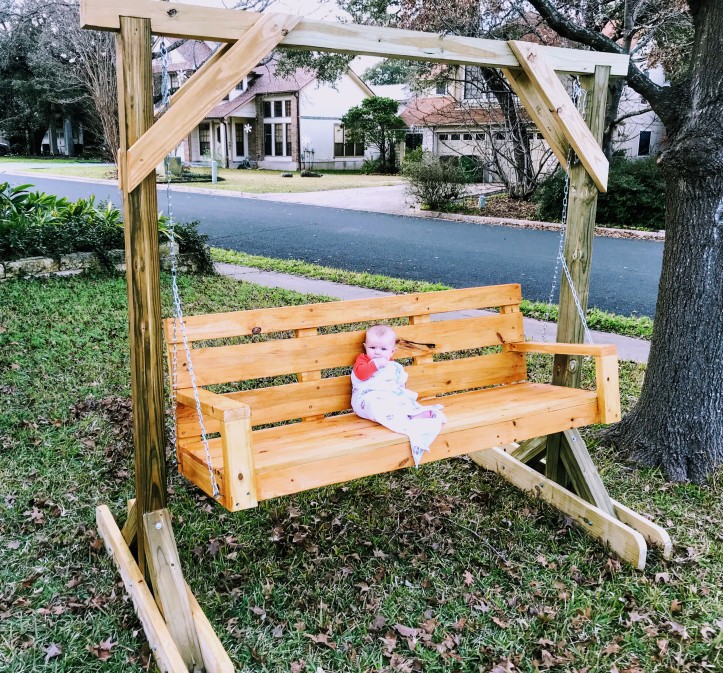 Now we can enjoy many pleasant winter nights out in the yard this winter. With temps in the 50s and 60s, we should get some good use out of it now before it gets much hotter!