On Sunday night, Lauren came back from Whole Foods with the ingredients for a bountiful feast. She did the prep work and seasoning, and I grilled it all up. Mmm, look at that spread! Everything truly was done to perfection, in all seriousness. All four items–salmon, asparagus, potatoes, and corn–were awesome.

Someone, however, felt left out of the fun. That would be our faithful hound, Baxter. We grilled up two extra cobs of corn for Lauren to use in a chili recipe for later in the week. I brought them inside and left them on the counter after dinner and kinda forgot about them sitting there. What a costly mistake that would wind up being.

Two hours after dinner, as we sat and watched TV, Lauren noticed there was just one cob of corn remaining on the counter. We did a quick search through the yard with the flashlight and found no traces of corn, not even a husk. A quick search online made it seem like this was a tough thing for some smaller dogs to digest, but it wasn’t until another hour later that we decided to induce vomiting.

Baxter, strangely, didn’t seem to like us holding him down while jabbing a turkey baster full of salt water down his throat. He scratched, squirmed, and spit most of it out. He puked a little, but it was mostly just the salt water. We decided to just keep a close eye on him and reevaluate in the morning.

Monday morning we were heading to work, and I spotted a tiny amount of cob barfed up in the corner. Maybe he was okay? As usual I locked the hound away in the crate to spend the morning, but this time he was much whinier than usual. Concerned, Lauren drove and took Baxter to work with her.

By mid-afternoon it became apparent that Baxter was not himself, and Lauren took him to our vet for an inspection. X-rays confirmed his stomach was enlarged many times its normal size, and with the vet closing for the day, he would have to be transferred to the emergency animal hospital that’s open overnight. The assumption was the corn cob was working its way into the intestines where it would become a critical problem, likely requiring surgery. 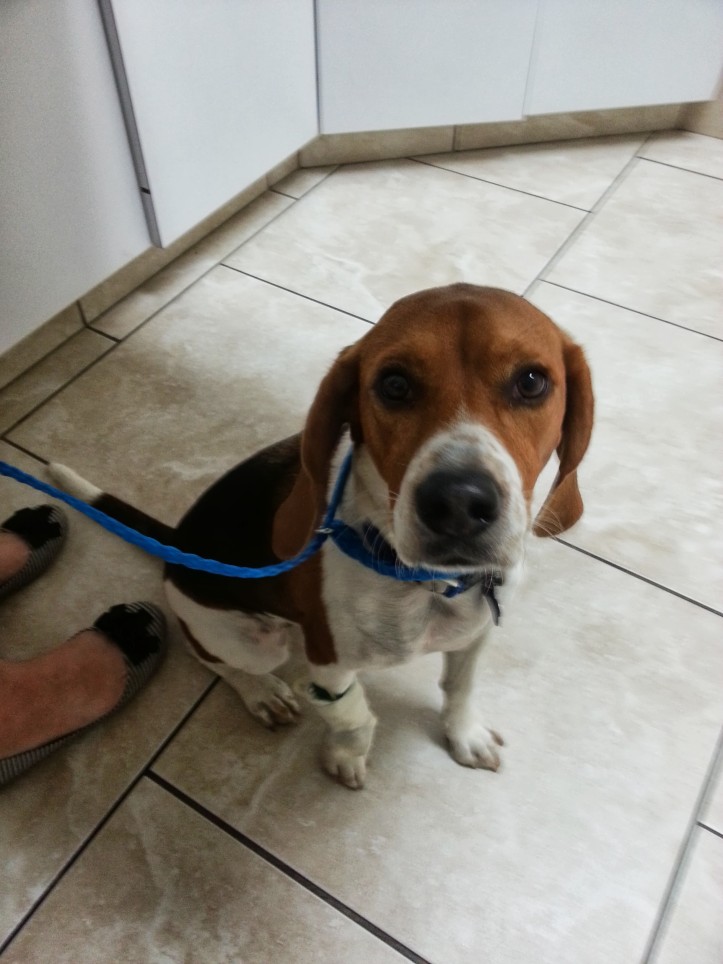 The ER vet originally quoted us around $2800 if surgery was needed, and around $1100 if they could find and fish the cob out his bottom via endoscopic camera, an evasive procedure to say the least. It was looking very bad for our bank accounts. But then just before we left, the vet decided to try getting Baxter to puke it out once more, and somehow it partially worked. She returned to the waiting room with a bucket full o’ puke and we confirmed at least half the cob had been freed.

We left for the night and kept Baxter under observation, hooked up to an IV. We were told no news would be good news throughout the night. Sure enough, when I returned in the morning it was confirmed Baxter had managed to either puke or poop out the remains of the cob. The hound is under 24-hour surveillance to make sure he’s in good health and spirits, traveling again to Lauren’s office for the day. He’s not 100% out of the woods just yet, but it’s looking better.

That hound had better get back to health soon so he can take up residence in this dog crate I constructed over the past month or so! It’s not the most amazing crate ever (none of the walls meet at a right angle) but it is still sturdy and should contain a hyper beagle.

So let this be a lesson to all you small dog owners out there. Corn cobs are not to be ingested. Unlike actual food, dogs’ stomachs can not break down the material in order to be digested, and inside of them it will remain until someone forces it out! I doubt Baxter learned anything from the experience, as he is unable to connect his eating of the cob with his traumatic experience. But I have learned in a very expensive way to keep crap like that out of his reach and to watch him like a hawk. And also we need to keep hydrogen peroxide on hand for more effective vomit inducing!