The mystery as to my whereabouts on that uneventful day in 1999 have so far remained a mystery. We know one thing for certain–that date did in fact occur, and I was there for it. I dedicated 24 hours of my life to that day, yet have no specific memory of any of it. My hope is that I can find one shred of proof that I did anything on that day, and then perhaps the other events of that day will come flooding back to me. Hell, I may very well have memories of that day, but just didn’t know that they occurred that day. Anyway…

My best bet to solve the mystery was to return to Carpenter, South Dakota, which I recently did. But before I left, I attempted to pursue one other angle: the local newspaper, the Clark County Courier. I e-mailed the paper manager, Bill Helkenn, and asked if he could dig up that week’s newspaper from the archives, scan the back page which contained Willow Lake news, and e-mail it back to me. This proved rather difficult for Mr. Helkenn, as the yearly archived papers were bound together and would be challenging to retrieve from a high shelf. Should he find the right page, scanning would prove a tall task as well. I then asked him if he would simply find the paper and tell me what the headlines on the back page were, but Mr. Helkenn needed to know which headline he was supposed to look for. “That’s the problem,” I explained. “I don’t know. I need you to tell me what the headlines are.” Obviously frustrated with my complicated request, he told me I would have to come over myself and do it. I determined this was probably not a top priority on a brief trip back home, so that’s where it ended.

When I returned to my parents’ house outside Carpenter, I was able to rummage through this box of memorabilia from my junior high and high school days. If there is an answer to the question of my whereabouts on 1/13/99, it would be in this box. If not, then the search is probably over.

The image below was the among the best shreds of evidence I could find. According to the Chapter 6 notes from this class (Biology, I’d assume), I had a paper on genetic birth disorders due on Monday, January 11, 1999. The fact that I included the year in my notes leads me to believe these notes were taken in December of 1998… why else would I bother to put the year down? I apparently also was practicing my signature and drawing a picture of some man wearing a small cap and smoking a cigar that looks somewhat phallic. I have no idea what my paper would have been about.

This was the next closest dated item I could find, and it’s a ways off… my February 27-28 issue of the Bi-Daily World News, an Onion-like publication I wrote, printed, and distributed amongst my schoolmates for fun. Given that this was about 8 pages long, there’s a decent chance I had been writing it for some time, perhaps even on January 13! Though I seem to remember doing most of this on a snowy weekend afternoon.

Another possible source of usefulness would be the school yearbook. The 1999 annual was fun to look through, but it included nothing of interest in relation to specific dates. 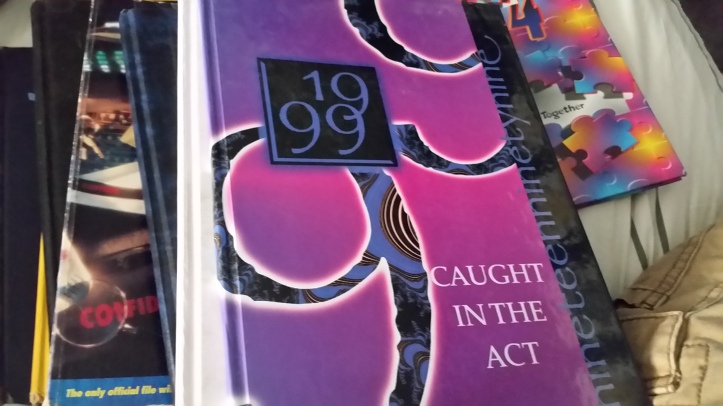 That’s it! That’s all that there was in my search of the Glanzer house for 1999 school memorabilia. I thought I had grabbed that Biology notebook and put it in our suitcase and brought it back to Texas, but I haven’t seen it since we returned. I was going to do a more thorough scan.

If I were on trial for some sort of crime and had to prove my innocence, perhaps I would go to greater lengths to find the answer by asking every single person in the school to check their old e-mail accounts, diaries, memorabilia, notebooks, etc. Maybe Willow Lake School has attendance records filed away somewhere. Maybe a former teacher has a daily log of lesson plans or something. Maybe the computer lab has records of sign-ins. Who knows?

If you were to pick a random day dating back to May 2003, however, I would almost surely be able to tell you what I was doing, and relatively quickly thanks to my blog and other mindless record-keeping. Maybe even back to late 1999 I could give you a pretty good guess, as that’s when my old Hotmail account started. (Go ahead, send me a date and I’ll try!)

Maybe someday I’ll stumble upon some new evidence .But for now, January 13, 1999 will remain a mystery. And, let’s be honest, there’s very little good reason I should devote one more second of time to this silly project.