I did not sell the pickup as quickly as I had originally thought. A kid was all set to buy it Friday night, but bailed when his dad apparently surprised him with a better vehicle. Other inquiries have been for much, much less than what I was seeking. So in the mean time, friends have continued to borrow the truck for hauling various items.

On Sunday night, I helped Bart pick up some patio furniture from Wal-Mart. He was inside paying and I was standing outside with the pickup parked by the curb with the hazard lights on, waiting for the giant box to be loaded. As I was standing there, a woman walked by awkwardly pushing two carts filled with giant plants. I saw a car slow down as it passed by her, words were exchanged, and fingers were pointed in my direction. I could hear the lady with the carts say “no, he didn’t even offer!” and then the car approached me. I could tell exactly what was coming. The window rolled down, and inside was a 60-ish-year-old woman glaring at me, giving me a very evil eye. 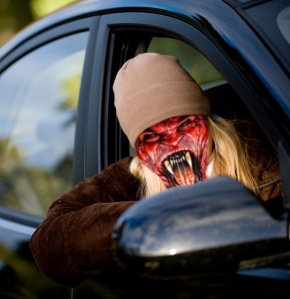 “WHAT THE HELL IS THE MATTER WITH YOU?! DIDN’T YOU SEE THAT POOR WOMAN IN NEED OF HELP? WHAT THE F&#$ WERE YOU THINKING?! WHATEVER HAPPENED TO CHIVALRY?! YOU’RE STANDING HERE TWIDDLING YOUR THUMBS AND SHE NEEDS HELP!! YOU GET YOUR ASS OVER THERE NOW AND HELP HER LOAD THOSE PLANTS!!!!!!!!”

It was a scene straight out of Curb Your Enthusiasm, and I was Larry David. I momentarily considered saying “No hablo Ingles?” but choked under pressure. Shaking in fear and shock, I did as demanded, leaving the pickup unattended, and trudged across the parking lot to help this woman put plants in her pickup while the other woman made damn sure I went over there before driving off. The woman was in fact in dire need of help and was very thankful I eventually offered my assistance.

True, I did observe this disheveled woman looking for a helping hand and ignored her. I had momentarily thought about offering some help, but I didn’t want to leave the pickup idling curbside. Plus, if she wanted help all she had to do was ask! I may have not been very gentlemanly, but that old cranky bitch was a far worse human being than me! I hadn’t been yelled at like that since my 7th grade football days with my mortal enemy Sumpy at the helm.

So, lesson learned, I guess. Next time I see a woman in need, I’ll be the first person on the scene.

3 thoughts on “Sh!t Got Real in the Wal-Mart Parking Lot”