We just returned home from San Francisco early this morning. For the first time, I took a red-eye flight, as we touched down in Austin at 4:37am. Let’s recap my half-work, half-play West Coast trip, shall we?

Tuesday
Work sent me and colleague Shenea to San Francisco for a conference put on annually by  Responsys, our company’s e-mail provider. After arriving in town we ate at a 50s Diner, checked into our hotel, and then waited for the opening festivities to begin by browsing the Contemporary Jewish Museum and perusing Golfsmith. Not knowing anyone else at the conference, I was heavily aided by the free drinks at a private meet-and-greet that evening. We were also treated to dinner that night by our account rep at a steakhouse on the Wharf. It just so happened another guy in the group was the general manager of the Sioux Falls Canaries from 2005-2010, so we had much to chat about.

Wednesday
The next morning I, and I suspect many others, were having a rough go of it after our night o’ fun. But we attended many inspirational talks and sessions throughout the day and I persevered. Late in the afternoon the fun began with the conference center hallways lined with fun little booths. I had my caricature done for the first time ever, and had a couple flipbooks made (great wedding reception idea!). That night we were treated to a private concert by Michael Franti, best known for his 2009 summer hit “Say Hey”. I, like most people, knew very little about Michael Franti but he put on a phenomenal show. Maybe it’s just because it was a private show but I’ve never seen a performer get the crowd involved so much. At one point he came into the crowd and put his arm around me while singing. Shenea got up and danced with him on stage. And then after the concert he hung out with us at an after party. Pretty cool guy!

Thursday
The conference and sessions continued on Thursday. Shenea departed after lunch to fly home. I stuck around for a little while longer but soon Lauren arrived in San Francisco, rented a car and bravely navigated her way downtown with her phone battery on 1%. As I said, that is not an easy city to navigate or drive in in general, but Lauren did it alone her first time in the city and amazingly tracked me down. From there we drove into Oakland and stopped at a Whole Foods to gear up for our visit an hour north to Napa Valley, a.k.a. Wine Country.

When we arrived in Napa we visited a vintner for a first tasting, then checked in at our place from airbnb.com. I can’t remember entirely why we decided to go the airbnb route instead of just getting a hotel, but it was inexpensive and we figured would be a fun experience. Our house was… well, shockingly vibrant, as you can see below. The homeowner Colleen and her dear friend Mr. Graeser treated us to some of their own wine right when we arrived. The 80-year-old Mr. Graeser was a well-known winemaker for many years before losing his winery business recently, and he had many a story to tell.

Friday
The highlight of our Friday was a 14-mile bike tour of Wine Country. Aside from the two of us, our group also consisted of our guide Amanda, a guide in training, and five others. We rode bikes across the area to three wineries, stopping off for tastings and little history lessons and lunch. You might picture us riding our bikes down little country gravel roads, but truth be told we were on the shoulder of fairly major roads with cars zooming by mere feet away. It was a perfect day for it though–sunny, 70s, slight breeze. The wine tastings were fun and the biking was fun but damn did my butt get sore riding around on that bike seat for seven hours. I had to pretty much stand and bike the last two miles. Anytime someone wanted to buy wine, we would leave it behind and the bike tour company would send a van to pick it up.

That night we were pretty beat, so after an early dinner at Kitchen Door in the Oxbow Market, we went to bed by 8 and watched the movie we deemed most appropriate for the trip, one of my all-time favorites, Sideways. 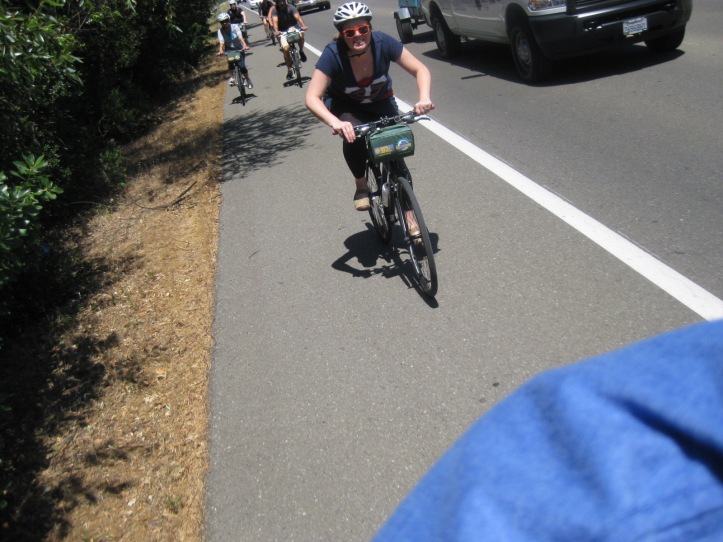 Saturday
We checked out of the Goddess Cove Winery Room #2 in the morning and set off for breakfast and a fun day of our own winery tours. One thing we didn’t count on was needing appointments, as we were turned away from our first stop. We did get into tastings at Frank Family (part of the Disney family) and Storybook Mountain, where we received a private tour that took us into historic caves.

And that was it for our winery tour. We visited five altogether and bought bottles from four of them to take home. I really wish I could get more out of these wine tastings. I see people take a glass and swirl it around and stick their nose down in the glass and examine the colors and pick out individual notes of flavors and describe everything they are experiencing… and then there’s me, with my typical response of “it’s good… I like it.” But I said that about all of them; I really did like all of them. Maybe that is something that would come with time but all I could tell you by tasting a wine is whether it is red, white, or possibly pink. I cannot differentiate a Cab Sauv from a Pinot Noir. And I would almost certainly not be able to differentiate between a $65 bottle of wine from a Napa winery and a $3 bottle from the bargain shelf at Whole Foods. Nevertheless, it was a fun thing to do.

In the afternoon we returned to San Francisco and checked into our hotel in the financial district. We went out to dinner at a great seafood/beer restaurant called Hope & Anchor, and then visited a fancy cocktail bar called Rickhouse. Again, it was a long day and we were off to bed early.

Sunday
Our last day on the road began with lunch at Paragon, near AT&T Park. After that it was off to the Giants/Rockies game, the 13th stadium I’ve checked off my list (Kaufman, Metrodome, Target Field, Miller Park, Wrigley, Fenway, Old Yankee, RFK, CitiField, Rogers, Minute Maid, Rangers). We had decent seats in the upper deck on the infield and saw a pretty long, drawn-out game won by the Giants, 7-3. San Francisco is such a strange place to be this time of year; in the sun it is hot to the point I was getting sunburned, and in the shade it was so chilly I needed a jacket.

After the game we still had like eight hours before our 11:43 flight home, so we visited Golden Gate Park and killed some time at a random tavern.

And that was the trip. It’s almost time to get back to work. I hopefully will get back to the office and feel a little refreshed and can dig back into e-mail stuff.